Get 10% off on your first order. Use code MUSE at checkout. Can’t you even imagine your morning’s start or achievement of a late-night study target without the mug of a caffeine jolt?

High five, I got you.

But have you ever wondered how a coffee lover always catches up with another coffee fanatic of the same wavelength irrespective of national boundaries?

Let’s dig into the history of coffee for that. Relax! It would be rather stimulating than boring.

There are many legends about who discovered coffee but Wherever and however the coffee originated, the speculation was the invigorating aroma of dark beans. The most popular and accepted one date back to 850 AD which suggests that the invigorating effects of coffee beans were first discovered by an Ethiopian goat herder Kaldi while roaming around the Ethiopian kingdom Kaffa, he noticed that his goats started acting strange, were suddenly energetic after eating dark fruits of mid-sized shrubbery. To rest his curious mind, he went to Chaplin of the nearby monastery and informed about the oddity of  “magic berries''.

Declaring it as devilish temptations, Chaplin tossed the berries into the fire, and the aroma of coffee developed and beguiled the monks; they then saved the beans from burning further.

Sooner, the first-ever coffee was brewed. It is believed that Ethiopians ate raw berries for a long time, and no doubt Kaffa is the originating land of coffee but is not responsible for the naming of coffee; they used to call it “buna” and consumed it rawly.

It was the Arabs who unlocked the true potential of coffee beans, they started roasting and grinding coffee beans to brew them up with hot water and were the first to build coffee plantations in Yemen.

They used to call it ‘qawah’ which in European land came to be known as “coffee”, “cafe” or “Kaffee”. Coffee has been going places since then.

But let’s talk about the link of Coffee with our motherland India out of all the worldly connections of coffee. The origin of coffee in India is another interesting tale, it is said that an Indian Sufi saint, Baba Budan was on his journey from Mocha, Yemen to his homeland India, discovered coffee as a dark liquid on the mocha port and found it refreshing, so he secretly strapped 7 beans to his chest as Arabia was very protective about its coffee industry and it was illegal to take coffee seeds away from the land. After returning, he planted them in Chikmagalur, Karnataka, around the mid to late 1600s, which is considered as the birthplace of coffee in India and the plantation later spread on to the hills which are known as Baba Budan hills.

Bow down - devotees of coffee, this man is a saviour. Interesting? Yeah, it is. Better choice: Global appreciation is also due to the fact it became the best alternative of tea and even a premium choice over tea for many in no time which contribute to the fact of coffee beans ruling the global charts.

Both tea and coffee share almost similar health benefits, the difference is higher caffeine levels of coffee that give a boost instantly.

This also raises a question about coffee being good for health in the long run, for which doctors have said countless times about consuming the drink in moderation with respect to caffeine sensitivity. Coffee became popular due to the presence of global cafe chains and coffeehouses like Starbucks, McCafe, Costa coffee, Dunkin donuts and others which have rocketed its growth.

Coffee’s supremacy over other beverages:

Coffee is the toughest competitor of tea and even water for a reason, this dark beverage’s feening has many convincing factors backing it. So, why do people drink coffee?

Coffee is the first and only choice of working professionals and learners at any stage, they need to meet deadlines timely, formulate tasks assigned at the last moments, do late night researches and achieve targets, for which a cup of coffee prepares you well, caffeine being a psychoactive drugs keeps you woke and energetic. Coffee is not just a mix of powder, a scoop of sugar and a cup of milk, it has evolved a long way.

The zealots will know how large the bean choice, roasting type and brewing method affect the taste of coffee which is filled in the mug up to the brim. The costing chart too is equally impressive, for instance in India you have the option to buy a coffee powder pouch for 1 cup which may cost as low as ₹1 and at the same time you have access to the most expensive cafes which can even cost more than ₹10k for a cup, and obviously, there is no limit for expense, you can get edible gold and other things added and whoa, it costs in lakhs now.

Also, the availability of coffee sees no boundaries, it’s one of the most traded commodities in the world. Furthermore, health benefits are enough to keep you sipping and for non-coffee drinkers to shift over to coffee. Coffee lovers will relate the moment coffee’s mesmerizing aroma touches the inside of nostrils and finds its way straight to our heart and soul.
Coffee is the fuel of creativity, the seeding element of intellect and the drink of the civilized.

This talk was as lovely as a cup of hot coffee, wasn’t it?

Of course, it was impressive, never thought that the history of coffee would be so damn exciting.

BUT HEY, you didn’t notice, your coffee mug has been empty for a while now, let’s get it refilled.

By the way, I have an idea, why not we express our coffeeness via outfit, it will be a public symbol of our love for coffee, our lifeline.

Will meet up in the nearby cafe soon, till then keep another cup ready.

ABOUT OUR STAR AUTHOR 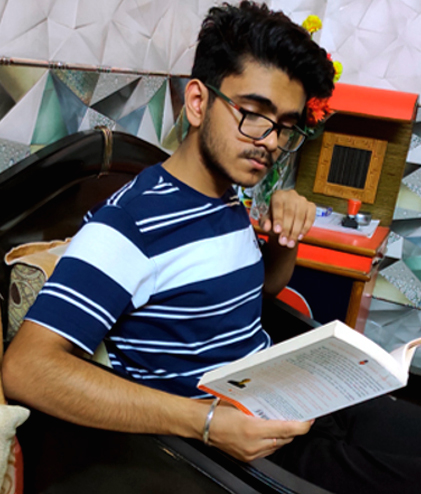 Harshul Garg - pursuing graduation in journalism and mass communication. I’m an overthinker who likes stalking clouds, sky gazing and being poetic while gliding on my terrace alone. I’m an ardent admirer of retro Bollywood and Nusrat Sahab, I love playing with words be it Hindi, English or Urdu, anything having a deep meaning wrapped with some rhyming and trueness has my respect.